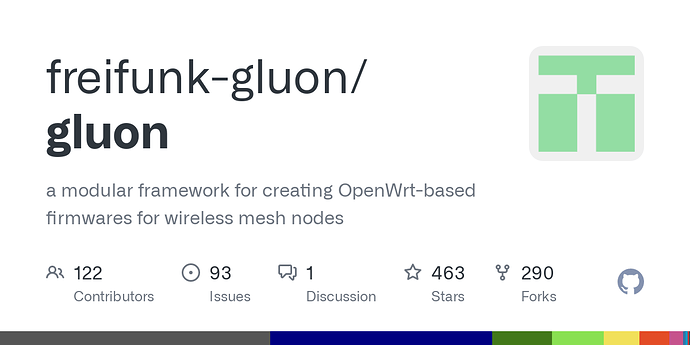 Hi,
I’ve just pushed a large commit, finally moving from OpenWrt CC to LEDE
(which will soon see its first release 17.01). This is the largest build
system rework in the history of Gluon.

Most of the changes have already been worked into the documentation on
ReadTheDocs, this mail will highlight a few important points to consider
when updating to the new version:

The build directory layout has changed; if no new clone is made after the
update to the latest Gluon master, the directories „build“ and „openwrt“
should be removed completely.

The Gluon Makefile has been rewritten to remove a lot of old hacks. This,
together with bugfixes in LEDE, should make uses of the make clean
command unnecessary in most cases, and a usual build will just consist of
the commands:

This should significantly speed up incremental builds.

Only minor changes to the site configuration are necessary.

Note that we no longer omit device-specific packages defined by LEDE’s
defaults, so devices with USB will now usually include the drivers for the
USB controller.

Due to further size increase of the kernel between 3.18 and 4.4, we were
not able to keep support for devices with 4MB flash in the ar71xx-generic
target. For this reason, we’ve introduced the slimmed-down ar71xx-tiny
target, which does not contain opkg, so no installation of new packages
is possible without rebuilding the image. This is probably not a
significant degradation, as the overlay was already too small for useful
package installations on these devices before.

The x86-kvm_guest target has been dropped from LEDE; x86-64 should be used
instead. 32-bit KVM images are not supported anymore.

LEDE does not contain Telnet anymore; instead it is using password-less SSH
by default. The config mode has been adjusted.

Many make targets like „prepare“ and „image/*“ have been retired. Instead,
commands like the following can be used to build individual images during
development:

Multiple devices may be passed separated by spaces.

The build system has been improved not to break anymore when commands are
executed in the „lede“ (previously „openwrt“) subdirectory. This is now
officially supported, the following command can be used to prepare the LEDE
tree for a specific Gluon target:

This will create the .config in the LEDE tree that would also be used for
normal Gluon builds. Afterwards, any LEDE make target (things like make package/.../prepare etc.) can be used directly in the lede subdirectory,
instead of providing a limited subset of commands available through the
Gluon Makefile.

WLAN issues on the TL-WR1043ND v1 and similar devices with old AR91xx chips
seem to have become even more severe lately. Due to another issue (that
we’re working on) the devices will quickly OOM after the WLAN adapter hangs
(probably due to filling send buffers), leading to a reboot.

Due to further size increase of the kernel between 3.18 and 4.4, we werenot able to keep support for devices with 4MB flash in the ar71xx-generictarget. For this reason, we’ve introduced the slimmed-down ar71xx-tinytarget, which does not contain opkg, so no installation of new packagesis possible without rebuilding the image. This is probably not asignificant degradation, as the overlay was already too small for usefulpackage installations on these devices before.